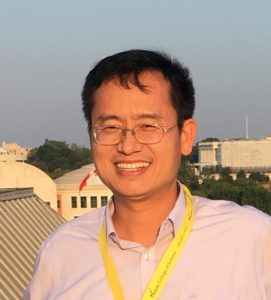 Chang-Tien Lu, professor in the Department of Computer Science and associate director of DAC

The challenge of detecting threats in war zones is even greater when assessing the possibility of an insider attack.

“Seemingly innocent insiders can become dangerous due to a number of circumstances including  personal relationships and geospatial environments,” said Chang-Tien Lu, a professor in the Department of Computer Science, associate director of the Discovery Analytics Center, and a faculty member in the National Science Foundation- sponsored UrbComp program

“For example,” Lu said, “an Afghan soldier aligned with U.S. troops or a civilian working on a military base could be influenced by a friend with Taliban ties and, over time, come to pose an increased threat.”

Lu has received $90,000 from the U.S. Army Corps of Engineers to design a machine learning-based intelligent system that combines entity and environmental information into a non-linear approach to evaluate insider threat level and identify dangerous scenarios.

In previous studies, Lu said, the incidence of crimes based on race, ethnicity, or religious bias have proved relative to the danger level as have environmental elements, like the number of  reported broken windows, thefts, and assaults.

Ph.D. student Lei Zhang is working on the 14-month project with Lu, who is his advisor.

Their results will be displayed in the form of percentages representing the likelihood of an imminent threat.

Lu said the new system should enhance the fundamental methodologies of data mining from heterogeneous spatial contexts and contribute to new computational models for threat discovery.

“We believe it will be flexible enough to be adapted to various military and civil contexts,”  said Lu.